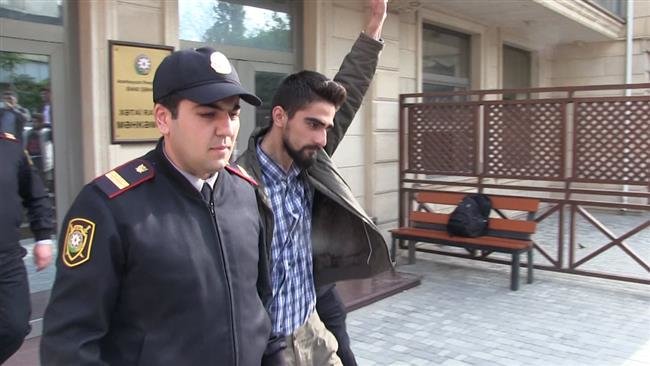 Update: Giyas Ibrahimov was released by presidential pardon almost three years into his sentence on March 17, 2019, ahead of Noruz—Azerbaijan’s New Year celebration. While the presidential pardoning of prisoners is common around this time, it traditionally has not included political prisoners. Upon his release, Giyas gave an interview about how he intends to continue his activism and how he thinks the international community can help activists working under duress in Azerbaijan. Read the interview here.

Giyas Ibramihov is a student and member of the NIDA Civic Movement, a pro-democracy youth organization that has been targeted by the government. In 2016, Giyas was arrested and sentenced to ten years in prison along with fellow activist Bayram Mammadov.

On May 9, 2016, the two students painted an anti-government message on the statue of Haydar Aliyev, the former President of Azerbaijan and the father of current president Ilham Aliyev. They posted photos of the graffiti on social media. The following day, both were kidnapped and taken to the police station, where they were brutally tortured and asked to publicly beg forgiveness and confess to serious drug crimes. After Bayram and Givas refused to plead guilty, police officers allegedly planted drugs at their apartments and arrested them on fabricated drug charges.

In December 2017, Giyas Ibrahimov and his father were accused of contempt of court, after they spoke out against the judge’s treatment of Giyas during a sentencing hearing. As a result, Giyas’s imprisonment was extended for three more months while his father, Hasan Ibrahimov, was sentenced to eighteen months of correctional labor with a 20-percent reduction of his salary. Both of them received death threats during their imprisonment.

In the beginning of 2019, Giyas took part in a hunger strike alongside various other Azeri political prisoners to protest the additional charges being brought against Mehman Huseynov, another Azeri activist who has been imprisoned since March 2017.

Baku Police Chief Mirgafar Seyidov, who tortured Bayram and Giyas in a police station, was included in a list of candidates for targeted sanctions by United States in the framework of Global Magnitsky Act. Amnesty International also highlighted their cases in its campaign for the release of political prisoners.

On March 17, 2019, Giyas was released by presidential pardon ahead of Noruz, Azerbaijan’s New Year celebration. While it is common for prisoners to be pardoned around this time, the amnesty has traditionally not extended to political prisoners. Giyas had spent nearly three years in prison.

Upon Giyas’ release, he gave an interview about his imprisonment and how he intends to continue his activism. He noted that “recognition and support by international community (sic) would be helpful for those continuing activism under risk.”