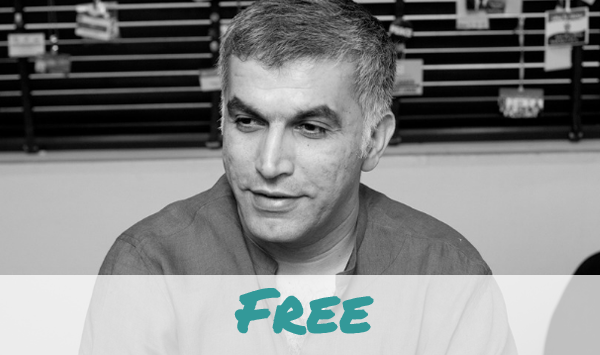 Nabeel Rajab is a prominent human rights defender and President of the Bahrain Center for Human Rights (BCHR). On February 21, 2018, Bahrain authorities sentenced Rajab to five years in prison for his criticism on Twitter of Bahrain’s prison conditions and for condemning Saudi Arabia’s role in the war in Yemen.

UPDATE: Nabeel Rajab, a prominent human rights lawyer and president of the Bahrain Center for Human Rights, was conditionally released from a Bahraini prison on June 9, 2020. Rajab was arrested in 2016 for televised interviews with the international press during which he discussed Bahrain’s human rights abuses. After already serving for two years, Bahrain’s Criminal Court sentenced Rajab to five-years in prison for his tweets criticizing Bahrain’s prison conditions and condemning Saudi Arabia’s role in the war in Yemen. Rajab will now complete the rest of his prison sentence under house arrest, which is allowed under a 2017 law which states that detainees can complete “alternative” sentences after they have served half of their sentence in prison.

On January 10, 2019, Bahrain rejected a call by the United Nation’s Human Rights Office to free the prominent human rights defender saying that Rajab’s “false tweets” were not protected by his right of freedom of expression. On January 15, 2019, Rajab was informed that all future family visits would be conducted through a glass wall – a procedure normally reserved for violent criminals because of its large psychological impact on the prisoner. Rajab recently lost his appeal to Bahrain’s Supreme Court against his five-year jail term on December 31, 2018.

Nabeel Rajab is a prominent human rights defender and President of the Bahrain Center for Human Rights (BCHR). On February 21, 2018, Bahrain authorities sentenced Rajab to five years in prison for his criticism on Twitter of Bahrain’s prison conditions and for condemning Saudi Arabia’s role in the war in Yemen. He was convicted of “disseminating false rumors in a time of war,” “offending a foreign country,” and “insulting a statutory body.” The international community has condemned his sentencing, but there are serious concerns about his health, which has steadily worsened while in jail.

A frequent target of state-sponsored harassment, Rajab was earlier arrested in October 2014 for “insulting the Ministries of Interior and Defense” for a series of Twitter posts in which he accused Bahraini security forces of cooperating with the Islamic State. He was released on bail, but was quickly arrested on new charges concerning Twitter posts about torture practices in Jaw Prison. On June 13, 2016, Bahrain authorities arrested and detained Rajab for the third time since 2014. Nabeel’s health deteriorated during this term, and on several occasions, he was denied medical treatment for his heart condition.

Shortly after this arrest, it came to light that Rajab’s charges were related to his televised interviews with the international press about Bahrain’s human rights abuses, as well as his Twitter posts. Bahrain sentenced him to two years in prison on July 10, 2017. Rajab was charged with making “false or malicious” comments against government authorities and was sentenced in absentia, as he was too ill to attend the hearing and remained in the hospital. His most recent charges were brought against him as a separate case, solely concerning his Twitter commentary. This trial was postponed 20 times, and many feel court procedures were violated by failing to give Rajab’s lawyers enough opportunity to defend him.

On June 5 2018, a Bahraini appeals court ruled that the 5-year prison sentence against human rights activist Nabeel Rajab would be upheld. Rajab himself did not attend the hearing, but his defense team emphasized that due process requirements had been violated. Rajab can now only appeal to Bahrain’s Court of Cassation or be pardoned by Bahrain’s king, Hamad bin Isa Khalifa.

Human rights organizations have united through online campaigns to mobilize support for Rajab, and several members of the European Union and other government leaders have issued statements for his release. Human rights activist and son of Rajab, Adam Nabeel Rajab, recently said: “My father is sacrificing himself to see a country which respects human rights, and he is happy to do that. I’m not exaggerating when I say he is unbreakable.” The European Union (EU) spoke out against Rajab’s sentence in a statement and called for his release, a request later echoed by both the United Nations, the government of Norway, and several civil society organizations.