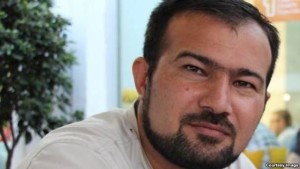 Seymur Hazi (or Haziyev) is an Azerbaijani journalist who has worked as a reporter for leading independent newspaper Azadliq and served as an anchor for opposition satellite TV program Azerbaijan Saati (“Azerbaijani Hour”). He is also a senior politician with the Front Party of Azerbaijan.

On August 29, 2014, Seymur Hazi was attacked at a bus stop during his commute to work. Authorities subsequently arrested him on charges of “hooliganism,” asserting that he had attacked and beat a Baku resident. Although Seymur’s lawyers maintained that he had acted in self-defense, he was sentenced to five years in prison on January 2015. He was then detained in Prison No. 17 in Baku, Azerbaijan.

Seymur’s supporters maintain that Seymur is being held on fabricated charges, pointing to the speed with which the police arrived to arrest Seymur as proof that the Azerbaijani authorities had orchestrated the altercation that led to his arrest. As a frequent critic of the Azerbaijani government, Seymur has a long history of being targeted for intimidation. In 2011, Seymur reported that he was abducted and tortured by six masked men, who warned him against further outspoken criticism of the government and confiscated his mobile phone. In an interview, he stated that “they gave me the message that they could put an end to my life whenever they want.”

Seymur has been detained for nearly five years, despite his sentence receiving international condemnation from multiple large international non-governmental organizations such as Human Rights Watch. In 2016, he was awarded the Free Media Award for Independent Journalism from the Fritt Ord Foundation and the ZEIT-Stiftung Ebelin und Gerd Bucerius for his reporting on corruption and abuse of power in Azerbaijan.

Seymur has been detained for nearly five years. In October 2018, his wife reported that he underwent surgery for his back.