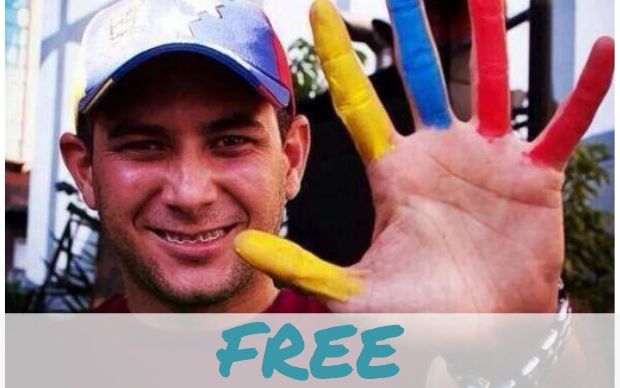 UPDATE: In December 2017, Ronny was released from the Helicoide—an infamous Venezuelan detention center—along with twelve other prisoners following a recommendation for the release of 80 political prisoners by the National Assembly. He was detained for three years and seven months.

Ronny Navarro is a Venezuelan activist and member of the political party Alianza Bravo Pueblo (“Fearless People’s Alliance”). He was initially arrested on May 10, 2014 for organizing a peaceful youth protest camp in the Plaza “Alfredo Sadel” in Las Mercedes, Caracas. Prosecutors charged Ronny with conspiracy and obstruction of public roads, then released him with the requirement that he present himself before the court every 15 days.

On June 28, 2014, officials from the Bolivarian National Intelligence Service (SEBIN) suddenly arrested Ronny at the airport in Maiquetia, Caracas, while he and his family were on their way to Maracaibo, Venezuela. Without bringing any evidence, prosecutors accused him of attempting to cross the border to Colombia. Ronny was subsequently sent to the Helicoide, a SEBIN detention center.

Ronny suffered a fracture in his left hand that was left untreated in the Helicoide, causing him to lose mobility in his fingers. On November 9, 2015, a judge approved Ronny’s release to house arrest so that he would be able to operate on his left hand. However, SEBIN officials never released Ronny.

In December 2017, the National Assembly recommended the release of more than 80 political prisoners. Ronny was one of 13 prisoners released by the end of the year. He spent three years and seven months in prison.