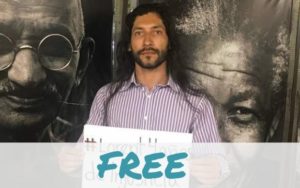 UPDATE: Renzo Prieto was released on June 2, 2018 among a larger spate of releases by the Venezuelan government. He served four years in prison.

Renzo Prieto is a Venezuelan lawmaker and activist. He is an elected representative to the Venezuelan parliament as a member of the opposition political party Voluntad Popular (“Popular Will”). He is also the Secretary General for Juventud Activa Venezuela Unida (JAVU), a platform for young Venezuelan activists.

Renzo Prieto was arrested on May 10, 2014 in front of the Mall El Tolon in Caracas by 30 officials of the Bolivarian National Intelligence Service (SEBIN) and the General Directorate of Military Counterintelligence (DGCIM), who did not identify themselves nor present an arrest warrant. A witness to the arrest reported that a group of armed men shot at Renzo for him to stop before placing him in a vehicle to be taken away. He was subsequently taken to a SEBIN detention center, the Helicoide, where he was denied access to a lawyer and questioned with the use of intimidation and psychological violence.

Renzo has been an activist since 2007, when he joined an anti-government student movement. A warrant was issued for his arrest while he was organizing demonstrations in the Venezuelan Andes for JAVU Tachira. He chose not to flee and traveled to Caracas instead after the arrest of movement leader Leopoldo Lopez, saying “I knew that if I left I would only regret it.”

Renzo was initially detained on charges including drug trafficking, criminal association, possessing explosives, fabricating weapons, and blocking traffic—many of which were later dropped. According to Bloomberg News, Renzo’s trial was “delayed more than 30 times as police refused to take him to court or the judge simply didn’t show.” The Working Group on Arbitrary Detention of the United Nations declared Renzo’s arrest arbitrary and called for his immediate release during its 73rd session from August to September 2015.

In prison, Renzo shared a cell with 15 other inmates. Guards denied him fresh air and water, and threatened to confine him in a cramped cell for disobeying orders. In December 2016, Renzo launched a 15-day hunger strike with a dozen other prisoners to demand his freedom—shedding more than 20 pounds in the process. He continued to participate in several protests throughout 2017, and was punished with “isolation, the prohibition of visits from relatives and lawyers, [and] the lack of access to sunlight.”

While he was still detained, Renzo was elected to the National Assembly in December 2014. Another student activist chose him as his deputy under a provision that allows elected representatives to name a substitute in the event of their incapacity.

Renzo was finally released after four years of detainment on June 2, 2018, as part of a national reconciliation effort attempted by Venezuelan leader Nicolas Maduro after his reelection in May 2018. Directly after his release, Renzo was sworn into the National Assembly (the legislator he served as understudy for is in exile). Renzo holds the record for longest politically-motivated imprisonment among all Venezuelan elected officials.