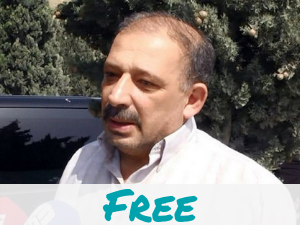 Rauf Mirkadirov is a prominent Azerbaijani journalist who served as the Turkey correspondent for the independent Azerbaijani newspaper Zerkalo. Throughout his career, Rauf publicly criticized the Turkish and Azerbaijani governments for their human rights abuses. Rauf was also a strong proponent of “citizen diplomacy” between Azerbaijan and Armenia, participating in various international conferences to settle the ongoing Nagorno-Karabakh conflict, a territorial and ethnic dispute between the two countries.

On April 19, 2014, Rauf was deported from Turkey, where he had been residing with his family for three years, and was taken into custody at the Heydar Aliyev Airport in Baku, Azerbaijan. The Azerbaijani government accused Rauf of espionage for Armenia, claiming that he transferred classified information about Azerbaijan’s political and military sectors to Armenian intelligence in 2008 and 2009 during his citizen diplomacy visits to Armenia, Georgia, and Turkey. He was promptly sentenced to pretrial detention for three months.

It is widely believed that Rauf was arrested due to an agreement between Turkey and Azerbaijan, with many pointing to the fact that he was deported only a few days after Turkish Prime Minister Recep Tayyip Erdogan visited Baku, Azerbaijan.

On December 28, 2015, the Azerbaijani government sentenced Rauf to six years in prison for “high treason, namely spying for Armenia.” His formal sentencing came after his pretrial detention was repeatedly extended. Both the US State Department and the European Union released statements condemning Rauf’s detention.

While in prison, Rauf suffered myriad health problems. He reported struggling with eye problems, issues with his blood pressure, and constant headaches.  He was placed in solitary confinement for the duration of his imprisonment.

On March 17, 2016, an appellate court suspended Rauf’s sentence and allowed him to go free. Although Rauf was released, he noted that he was not acquitted and vowed to continue fighting for his sentence to be overturned. Rauf had been detained for nearly two years.