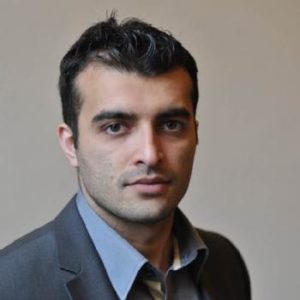 UPDATE: Rasul Jafarov was released by presidential pardon on March 17, 2016. On July 25, 2019, the European Court of Human Rights ruled that the Azerbaijani government had unlawfully denied Rasul’s organization, the Human Rights Club, registration as a lawful NGO in the country. The Human Rights Club’s status as an unofficial NGO served as the basis for Rasul’s detention in 2014.

Rasul Jafarov is a lawyer and prominent human rights defender in Azerbaijan. He has served as a reporter for the Institute for Reporters’ Freedom and Safety, investigating numerous criminal cases against journalists. He further founded the Human Rights Club (HRC), a non-governmental organization (NGO) that launched the widely covered “Sing for Democracy” campaign—a campaign that highlighted human rights violations in Azerbaijan while the country hosted the Eurovision Song Contest. He now leads the “Art for Democracy” campaign, which grew out of “Sing for Democracy.”

In July 2014, Rasul was summoned for questioning at the Prosecutor General’s office. There, he was interrogated as a witness in connection to alleged irregularities in the financial activities of a number of NGOs. The Azerbaijani authorities subsequently searched HRC and seized a number of its documents.

On August 2, 2014, Rasul was summoned back to the Prosecutor General’s office for questioning as a witness. When he arrived, he was arrested and charged with illegal entrepreneurship, large-scale tax evasion, and abuse of power. Rasul was subsequently sentenced to pretrial detention for three months. In December 2014, he was additionally charged with high-level embezzlement.

On April 16, 2015, Rasul was convicted of all charges and sentenced to six and a half years in prison. According to the court, Rasul failed to register grants made to the HRC and misused the money provided in those grants. Upon appeal, Rasul’s sentence was reduced by three months on July 31, 2015, making his total sentence six years and three months.

On March 17, 2016, Rasul was released by presidential pardon, along with 148 other prisoners. The pardon came in the weeks leading up to Noruz, Azerbaijan’s New Year celebration. While it is common for prisoners to be pardoned around Noruz, political prisoners have traditionally not been included in the amnesty. Rasul had been detained for nearly two years.

On March 17, 2016, the European Court of Human Rights ruled that the Azerbaijani authorities had unjustly detained Rasul as punishment for his activities as a human rights defender. The court noted that his arrest was part of a larger campaign to crack down on human rights defenders in 2014.

On July 25, 2019, the European Court of Human Rights further ruled that the Azerbaijani government had illegally denied Rasul’s application to register the Human Rights Club as an NGO. The Court found that the rejected registration, which served as the basis for Rasul’s detention, violated his and other HRC members’ freedom of association.