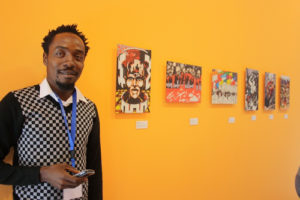 UPDATE: On May 28, after having been banned from travelling for three months, political cartoonist and blogger Ramón Nsé Esono Ebalé was finally able to leave Equatorial Guinea.

UPDATE: On March 7, 2018, an Equatoguinean court released Ramon after having served six months on trumped-up charges of “money-laundering” and “counterfeit.” The prosecution dropped all charges after the police officer who had accused Ramon of engaging in counterfeit confessed he had been following orders from his superiors who wanted to implicate Ramon in this criminal activity.

On September 16, 2017, Equatoguinean authorities detained political cartoonist and blogger Ramón Nsé Esono Ebalé in Malabo, Equatorial Guinea. He was accused of “money laundering and counterfeiting” and was arrested alongside two of his friends with Spanish nationality, who were quickly released later that day. Civil society members believe Ramón’s arrest and detainment was in connection to his illustrations, which are critical of Equatorial Guinea’s government and the country’s authoritarian President Teodoro Obiang Nguema Mbasogo. In 2017, he also worked with the civil society organization Equatorial Guinea Justice (EGJ) on a human rights art project. On December 7, 2017, and Equatoguinean judge ruled Ramón was guilty.

In November 2017, the Cartoonists Rights Network International (CRNI) awarded Ramón their 2017 Award for Courage in Editorial Cartooning, which his wife accepted on his behalf. Since his detainment, artists around the world have expressed solidarity with Ramón by drawing pictures calling for his release. View their illustrations here.