Over 60 human rights organizations from across the world have signed the below open letter to show solidarity with the Egyptian Initiative for Personal Rights and urge that Egyptian authorities immediately and unconditionally release Karim Ennarah, Mohammed Basheer, and Gasser Abdel-Razek. 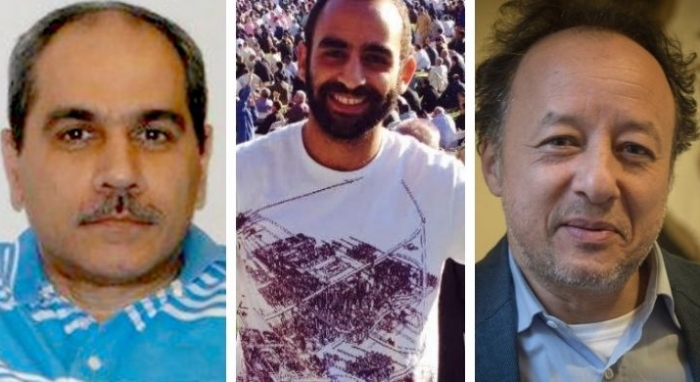 We stand in solidarity with the Egyptian Initiative for Personal Rights (EIPR). We are human rights organizations and initiatives deeply concerned about the unprecedented and alarming escalation against EIPR, one of Egypt’s oldest and most reputable human rights organizations. Since 15 November 2020, three employees of the organization were arbitrarily arrested and detained by the Egyptian security forces, Karim Ennarah Director of EIPR’s Criminal Justice Unit, Mohammed Basheer, EIPR’s Administrative Manager, and Gasser Abdel-Razek, the Executive Director of EIPR.

We are extremely concerned about the unfounded accusations levelled against Mohammed Basheer during his questioning at the Supreme State Security Prosecution’s office, which included joining an unnamed terrorist organization and “committing one of the crimes of funding terrorism”. We were appalled to hear that such trumped charges can be made against an administrative manager at an established NGO and legal aid organization. Not to mention EIPR is one of the few independent human rights NGOs remaining in Egypt who continues to work publicly and to engage with state institutions.

Mohammed Basheer was arrested from his home in the early hours of Sunday, 15 November, by a heavily armed security force, and detained incommunicado in a security facility for 12 hours before being transferred to the Supreme State Security Prosecution (SSSP). He was questioned, respectively at the National Security Agency without a lawyer and then at the SSSP, about a visit by several diplomats to the offices of EIPR, about their criminal defense work and their publications. These are perfectly legitimate activities for a human rights and legal aid organization to undertake and do not justify in any way the prosecution’s decision to detain him for 15 days. Nor does it explain the accusations of joining a terrorist organization, spreading false information, undermining public security – charges that were not supported by any evidence.

Just days after the arrest of Basheer, the authorities arrested Karim Ennarah on 18 November 2020, while he was sitting in a restaurant in Dahab, South Sinai, while on vacation. Security forces had gone to Ennarah’s home in Cairo early in the morning of 17 November 2020, while he was not there. Security forces confiscated Ennarah’s laptop, phone and personal belongings during his arrest. After an investigation that lasted for four hours, the Supreme State Security Procurator ordered Ennarah’s pretrial detention for 15 days per case 855 of 2020 pending investigations over fabricated charges of “joining a terrorist group”, “using a social media account to spread false news” and “spreading false news”. The prosecutor said that this is based on security investigations showing that Karim “agreed with a group inside prisons to spread false rumors that could undermine public peace and public safety.”

On 19 November, EIPR reported that security forces had arrested Gasser Abdel-Razek from his home in Cairo and taken him to an unknown location. He later appeared and was interrogated at the State Security Prosecution, who ordered his pretrial detention for 15 days in case 855 pending investigations into the unfounded charges of “joining a terrorist group”, “disseminating false statements to undermine public security”, and “using the internet to publish false news”.

We believe that Karim Ennarah, Mohammed Basheer, and Gasser Abdel-Razek are being targeted solely because of the legitimate work of EIPR, in order to intimidate EIPR staff members and the Egyptian human rights community at large and therefore their detention is arbitrary. We are also increasingly concerned about the ever-tightening space for organizations like EIPR and others who choose to carry out their work publicly in Egypt, and who are being punished for trying to uphold human rights and constitutional norms in the country.

We are writing to you because we are counting on your support and advocacy for the immediate and unconditional release of Mohammed Basheer, Karim Ennarah, and Gasser Abdel-Razek and the dismissal of the case against them.