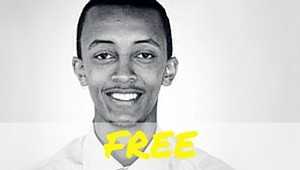 UPDATE October 16, 2015:  After 539 days in prison, Natnael Feleke was released from jail.  The Ethiopian Federal High Court the blogger of terrorism charges that were lodged against him in connection with his online activism.

Nathnael Feleke, an economist who worked for Construction and Business Bank in Addis Ababa and a co-founder of Zone 9, was detained on April 25, 2014. He was arrested with other bloggers and journalists who aim to spread awareness of human rights violations. Due to his deep engagement in civic issues on Facebook and Twitter, the authorities accused him of plotting to incite violence in cooperation with two terrorist organizations. On July 8 and 9, 2015, a number of imprisoned Zone 9 bloggers and journalists were released with charges dropped. However, Feleke remains behind the bars. He was an active member of Ethiopian Economic Association.