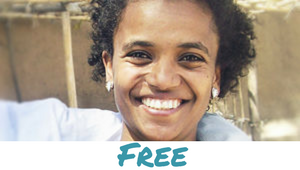 Mahlet Fantahun is a former database administrator at the Ministry of Health in Addis Ababa and is a co-founder of Zone 9, an Amheric blog run by a group of activists whose motto is: “We blog because we care.” The blog is “mainly aimed at creating an alternative and independent platform of ideas on the socio-political conditions of Ethiopia—in which public discourse will be encouraged.”

The name is a play off of the eight zones in Kality Prison, the main jail where Ethiopia’s political prisoners are held. The bloggers refer to the entire country as “Zone 9” because of Ethiopia’s lack of democratic freedoms. In November 2015, the Zone 9 bloggers were awarded the International Press Freedom Award from the Committee to Protect Journalists. Fantahun received her degree in Applied Mathematics. She seeks to foster civic engagement by posting critical comments on social and political issues in Ethiopia on her Facebook page.

Fantahun was released after serving an unjust 12 day detention without any formal charges at Gotera-Pepsi Police Station in Addis Ababa. She was arrested with 11 other journalists, who were also freed.

On March 25, 2018, Fantahun was re-arrested along with 11 other human rights activists and journalists. The arrests were carried out while the defenders were attending a private gathering in Addis Ababa at the home of journalist Temesgen Desalegn. The gathering was held in recognition of the recent release of thousands of political prisoners amidst ongoing and widespread protests against political marginalization and land grabbing in the Oromia and Amhara regions which began in late 2015. Fantahun, along with fellow Zone9 blogger Befeqadu Hailu, was arrested for violating the State of Emergency provisions that forbid gathering en masse and is being held at Gotera-Pepsi Police Station in Addis Ababa.

Fantahun was arrested on April 25, 2014. Like other Zone 9 bloggers and journalists who aim to spread awareness of human rights violations, she was charged with terrorism. On July 9, 2015, Fantahun was released and her charges were dropped.

How can you help?

Send direct messages to your local and national governments calling for the release of political prisoners.

Ask local and online newspapers, journalists and writers in your city to highlight the stories of imprisoned activists.

Take photos with your friends with a #SetThemFree sign and the names of activists you want to support. Share them in your social media spaces, and send them to us for us share.