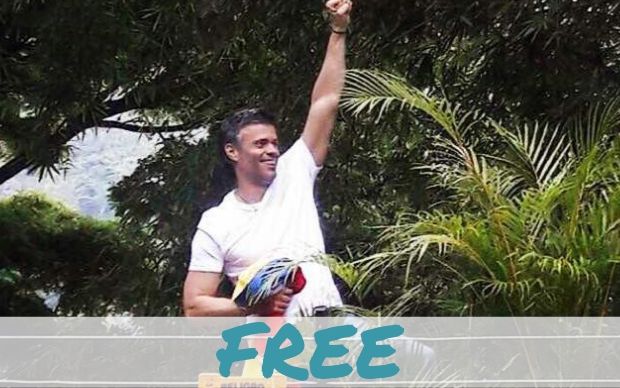 UPDATE: Leopoldo was released from house arrest on April 30, 2019, by the soldiers who were guarding his home. He was detained for more than five years, two of which were under house arrest. He now resides in the Spanish embassy in Caracas, as the Venezuelan president has issued a warrant for his arrest.

Leopoldo Lopez is a prominent Venezuelan activist and lawmaker. He served as mayor of the Chacao district in Caracas, Venezuela for eight years between 2001 and 2008, then went on to found the opposition political party Voluntad Popular (“Popular Will”) in 2009.

In January 2014, Leopoldo called for peaceful demonstrations to protest government-sponsored violence against dissidents. In response, the Venezuelan government issued an arrest warrant for Leopoldo, accusing him of terrorism, murder and grievous bodily harm, public incitement, arson damages to property and conspiracy to commit crimes. Leopoldo turned himself in to the Venezuelan National Guard five days later on February 18, 2014, declaring “if my imprisonment helps awaken our people…then for me it will have been worth it.”

Leopoldo was subsequently sentenced to 13 years and nine months in prison and held in the maximum security prison Ramo Verde. His sentence was denounced by prominent members of the international community, including Amnesty International, the United Nations Working Group on Arbitrary Detention, and then-US president Barack Obama.

On April 30, 2019, Leopoldo appeared to have escaped from house arrest in a video posted online by Juan Guaido, leader of the Venezuelan National Assembly. In the video, Leopoldo stands behind Guaido as he gives a public address. Reports soon emerged that Leopoldo had been freed by the soldiers who were guarding his home, after they decided to support Guaido.

Venezuelan President Nicolas Maduro has issued a warrant for Leopoldo’s arrest. Since May 2, 2019, Leopoldo and his family have been residing in the Spanish embassy in Caracas.