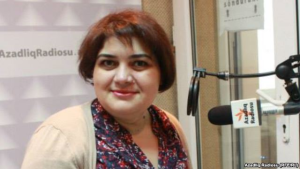 UPDATE: On January 10, 2019, the European Court of Human Rights ruled that the Azerbaijani government had violated her right to privacy and freedom of expression. She had been released on probation on May 25, 2016, after the court reduced her sentence to a 3.5-year suspended sentence.

Khadija Ismayilova is an investigative journalist and radio host for the Azerbaijani service of Radio Free Europe/Radio Liberty (RFE/RL). She also served as a regional coordinator and journalism trainer for the Organized Crime and Corruption Reporting Project (OCCRP). As an investigative journalist, Khadija uncovered massive levels of corruption involving Azerbaijani President Ilham Aliyev and his family.

On December 5, 2014, Khadija was arrested and placed in pre-trial detention for two months. Authorities accused her of inciting a former colleague to commit suicide, alleging that she pressured the editorial staff of RFE/RL not to rehire him. This claim was refuted by Khadija’s editors at RFE/RL.

Khadija’s pre-trial detention was extended repeatedly, until authorities charged her with embezzlement, illegal entrepreneurship, tax evasion, and abuse of power in a closed-door trial. On September 1, 2015, Khadija was sentenced to seven and a half years in prison.

Prior to her detention, Khadija has been repeatedly targeted by the Azerbaijani government for her investigative work. On March 7, 2012, Khadija received an envelope containing screenshots taken from a video of her engaging in a sexual act with her boyfriend, along with the threat “Whore, refrain from what you are doing, otherwise you will be shamed!” She subsequently discovered several hidden cameras in her apartment. When Khadija publicly replied to the blackmail letter and refused to stop her investigative journalism, the full video was released online on several pro-government websites. The video release put her life in danger—a male relative confronted Khadija with a knife after viewing the video. Khadija noted that “He reacted like all men here would react. He was about to kill me.”

In 2013, Khadija participated in an unsanctioned protest against police abuse. Consequently, the Azerbaijani government detained her and imposed a fine of 500 manat (293 USD) upon her. When she refused to pay the fine, the government assigned her 200 hours of community service by sweeping the streets. After Khadija turned her community service into a public campaign called “Sweeping for Democracy,” the government threatened her with three months of prison if she did not move her required community service to a more private venue, a rehabilitation facility.

Khadija’s arrest received widespread international condemnation, including from the US Department of State, the Organization for Security and Cooperation in Europe (OSCE), the European Union, and prominent international human rights organizations such as Amnesty International, Human Rights Watch, and the Committee to Protect Journalists.

On May 25, 2016, Khadija was released on probation after her sentence was reduced to three and a half years and suspended. She had spent a year and a half in prison.

Khadija continues to be an outspoken advocate against the Azerbaijani government. She called for an investigation into her violation of privacy after the government took intimate videos of her through cameras hidden throughout her apartment. On January 10, 2019, the European Court of Human Rights unanimously ruled that the Azerbaijani government had violated her right of privacy and freedom of expression, and ordered the government to pay Khadija 15,000 euros as retribution.