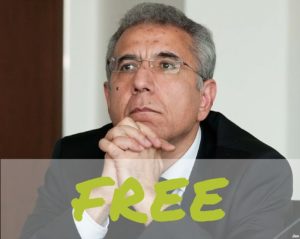 UPDATE: Intigam Aliyev was released on probation on March 28, 2016. On September 20, 2018, the European Court of Human Rights ruled that the Azerbaijani government had detained him on politically motivated charges.

Intigam Aliyev is a leading Azerbaijani human rights lawyer and activist. As the founder and head of the Legal Education Society, an organization that provides legal assistance to low-income and marginalized citizens in Azerbaijan, Intigam has defended over 200 clients in the European Court of Human Rights. He received the Homo Homini award in 2012 for his work in human rights.

On August 8, 2014, Intigam was detained in Baku, Azerbaijan and charged with “tax evasion, abuse of office, and illegal entrepreneurship.” Authorities further raided the office of the Legal Education Society, confiscating important case documents and forcing the NGO to close. Intigam was quickly placed in pre-trial detention for three months, where his health deteriorated. On November 7, 2014, his family members reported that Intigam was suffering from violent headaches, loss of appetite, and insomnia.

During Intigam’s trial, observers criticized the authorities for attempting to obstruct media access to the courtroom and for denying Intigam and his lawyers access to case files and documents. On April 22, 2015, Intigam was sentenced to seven and a half years in prison. In his closing statement to the court, Intigam stated: “the arrests can take away our freedom, but not our desire for freedom. Our arrest continues our struggle for freedom.” While in prison, Intigam continued to advocate for human rights defenders and political prisoners, representing dozens of political prisoners from behind bars.

Intigam’s imprisonment received widespread international attention. On July 14, 2015, 95 lawyers from 24 countries released a public letter to Azerbaijani President Ilham Aliyev to call for Intigam’s immediate and unconditional release. In October 2014 and October 2015, while imprisoned, Intigam was respectively awarded the Norwegian Helsinki Committee’s Andrei Sarkhov Freedom Award and the International Bar Association’s Human Rights Award. He was further honored for his human rights work in February 2016, when the Council of Bar and Law Societies in Europe awarded him their annual Human Rights Award while he was still behind bars.

On September 20, 2018, the European Court of Human Rights ruled that Intigam’s arrest was “driven by improper reasons and the actual purpose…was to silence and punish the applicant for his activities in the area of human rights.” The Court ordered the Azerbaijani government to pay Intigam a total of 26,150 euros (29,225 USD).