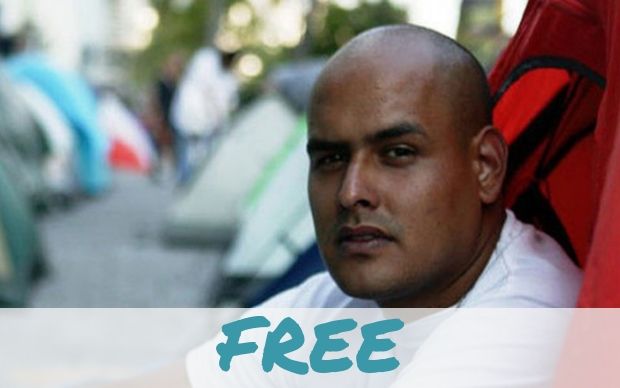 UPDATE: Gerardo was released on December 31, 2016, along with several other student activists, after spending two and a half years in prison. He continues his political advocacy by campaigning for the closure of SEBIN detention center La Tumba.

Gerardo Carrero is a Venezuelan activist who serves as the national coordinator of the Venezuelan Youth Organization. In 2014, he worked to organize protests under the movement “National Conscience,” in which students installed tents in front of the headquarters of the United Nations Development Programme in Caracas, Venezuela. The movement was aimed to peacefully protest against the economic and social policies of the Venezuelan government.

On May 8, 2014, officials from the Bolivarian National Intelligence Service (SEBIN) detained Gerardo along with 120 other student protestors. Although 112 students were shortly released, Gerardo remained in prison as prosecutors charged him with obstruction of public roads, incitement to disobey the law, and minor drug usage. He was held in the Helicoide, an infamous SEBIN detention center.

After spending 103 days in the Helicoide, Gerardo went on hunger strike to protest the prolonged detention of all the student activists who had been arrested in 2014, including himself. In an effort to force Gerardo to break the hunger strike, SEBIN officials reportedly handcuffed him to a pipe and beat him with wooden boards until they broke against his legs. After his family members protested his treatment, a judge ruled in September 2014 for Gerardo to be transferred to La Tumba (“The Tomb”), another SEBIN prison.

Gerardo compared his detainment in La Tumba to being “buried alive.” There, he was subjected to solitary confinement in a 2 x 3 meter cell, 15 meters underground. He was kept away from sunlight for five months and learned to identify nightfall when the subway stopped passing over his head. His mistreatment caused him to despair so much that he tried to commit suicide three days after arriving.

While in La Tumba, Gerardo developed serious gastrointestinal problems, fever, diarrhea and vomiting, skin abscesses, and dental pain. To protest his mistreatment, Gerardo went on another hunger strike along with fellow La Tumba prisoners Lorent Saleh and Gabrielle Valles. Their abuse gained international attention, leading the Inter-American Commission of Human Rights to pressure the Venezuelan authorities to transfer Gerardo back to a cell in the Helicoide. He was finally transferred back to the Helicoide on February 22, 2015, after spending seven months in La Tumba.

Gerardo stayed in the Helicoide for almost another two years. He was finally released on December 31, 2016. Gerardo continues his political activism and now advocates for the closure of La Tumba.