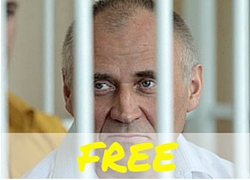 UPDATE: On April 10, 2019, Mikalai Statkevich was handed 15 days of detention for organizing a protest against the governments demolition a mass grave site. Statkevich had called on civil society members to protest the bulldozing of crosses that marked the graves of Belarusians killed by Soviet secret police in the 1930s and 40s.

Former Belarusian presidential candidate Mikalay Statkevich was released from prison after being held for nearly five years. President Alyaksandr Lukashenka pardoned him and five others on August 22, 2015.

Mikalai Statkevich ran as an opposition presidential candidate in 2010. He was arrested after attending a peaceful post-election demonstration against election fraud in Minsk. In May 2011, he was sentenced to six years imprisonment for organizing mass disorder. At trial, no proof of violent attacks during the demonstration were presented.