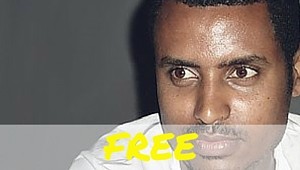 UPDATE October 16, 2015:  After 539 days in prison, Atnaf Berhane was released from jail.  The Ethiopian Federal High Court the blogger of terrorism charges that were lodged against him in connection with his online activism.

Atnaf Berahane, an IT specialist, blogger, human right activist and co-founder of a bloggers’ organization called Zone 9, was arrested and charged with terrorism-related activities on April 25, 2014. He was detained along with other Zone 9 bloggers and journalists who aim to spread awareness of human rights violations. Although a number of bloggers and journalists were released in July of 2015, Berahane is still behind the bars with an uncertain fate. Berahane has savvy skills on tweeting local news, which helps him to raise the awareness on critical issues. He worked for Addis Ababa City Administration at Bole Sub-City before he was imprisoned.