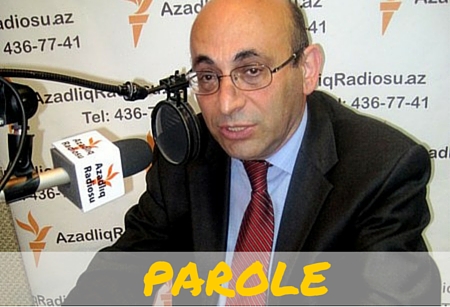 UPDATE: On April 19, 2016, Arif Yunus and his wife Leyla Yunus were allowed to travel to the Netherlands, where they received political asylum. In May 2017, the Azerbaijani government ordered the couple to return to the country to stand trial. The couple now resides in exile in the Netherlands.

Arif Yunus is an Azerbaijani author, historian, and leading human rights activist. He is the head of the Department of Conflict and Migration at the Institute for Peace and Democracy, a prominent human rights non-governmental organization (NGO) in Azerbaijan. He is additionally married to Leyla Yunus, another leading human rights activist and the founding director of the Institute for Peace and Democracy. The couple is active in “citizen diplomacy,” participating in peace talks between Azerbaijan and Armenia to try and resolve the Nagorno-Karabkh conflict—a long-standing territorial dispute between the two countries.

On July 30, 2014, Arif and Leyla were detained while on their way to Qatar from the airport in Baku, Azerbaijan. Both were accused of spying for the Armenian government. While Leyla was immediately taken to pretrial detention, Arif was hospitalized due to his heart condition and then placed under house arrest. On August 5, 2014, Arif was arrested and charged with treason, large-scale fraud, forgery, tax evasion, and illegal entrepreneurship. He was then sent to pretrial detention, where he remained for a year without trial.

Arif’s health deteriorated significantly while in pretrial detention, as he was denied proper medical treatment. During trial proceedings on August 3, 2015, Arif lost consciousness. Doctors were brought in for the following three days of hearings, giving him injections so that the hearings could continue. Family members of Arif further reported that he had been placed in solitary confinement.

On August 13, 2015, Arif was sentenced to seven years in jail. His sentence was suspended on November 12, 2015, due to health issues. Although Arif and Leyla were both released from prison on suspended sentences, they were forced to sign documents agreeing not to leave Baku, Azerbaijan.

Arif and Leyla’s detentions received widespread international outcry. On August 6, 2014, directly after Arif’s arrest, 60 NGOs issued a joint letter calling for the couple’s unconditional release. In August and September 2015, the US and the European Parliament issued statements and resolutions calling for the Azerbaijani government to release Arif and Leyla.

Following Arif’s release from prison, international pressure continued to mount on the Azerbaijani government as Arif and Leyla were banned from traveling outside the country to receive medical care. However, on April 19, 2016, the Azerbaijani authorities lifted the travel ban and allowed the couple to travel to the Netherlands, where they reunited with their daughter and received the medical treatment they needed.

The couple applied for and received asylum in the Netherlands. Nevertheless, the couple continues to be harassed by the Azerbaijani government. In May 2017, the Azerbaijani government ordered them to return to the country, so as to appear before court concerning their appeal. Supporters feared that the government would issue international arrest warrants to force the couple to return to Azerbaijan, leading 25 NGOs to issue a joint letter to Interpol warning against the warrants.