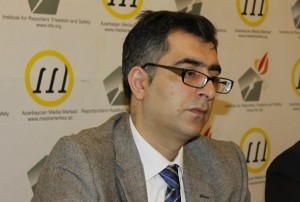 UPDATE: Anar Mammadli was released on March 17, 2016, ahead of Noruz—Azerbaijan’s New Year celebration. Following his release, he co-authored an op-ed article with two other Azerbaijani political prisoners. Read the article here.

Anar Mammadli is a prominent Azerbaijani human rights activist and independent elections monitor who has been particularly outspoken about the Azerbaijani government’s improper conduct of elections. He founded the Election Monitoring and Democracy Studies Center (EMDS), a non-governmental organization that works to support free and fair elections in Azerbaijan.

Following the October 2013 presidential elections, the EMDS issued a report that pointed to “large-scale irregularities and fraud” during the elections. A week later, the General Prosecutor’s Office opened an investigation into the EMDS.

On December 16, 2013, Anar was arrested and charged with “tax evasion, abuse of authority, and illegal entrepreneurship.” He was promptly sentenced to three months in pre-trial detention.

Despite widespread international attention, Anar was sentenced to five and a half years in prison on May 26, 2014. In September 2014, the Council of Europe awarded Anar the Vaclav Havel Human Rights Prize for his “outstanding civil society action in defense of human rights.”

On March 16, 2016, Anar was released by presidential pardon on March 17, 2016, ahead of Noruz—Azerbaijan’s New Year celebration. The presidential pardoning of prisoners is common around this time, but generally does not include political prisoners. Anar had spent more than two years in prison.

Upon Anar’s release, he published an op-ed article alongside two other freed political prisoners, Intigam Aliyev and Rasul Jafarov, where he called for the release of Azerbaijan’s remaining political prisoners. In Anar’s words, “if there is no respect for the rule of law, if we cannot enjoy basic human rights, then our freedom is subject to the whimsical pardons and arbitrary decisions of Azeri courts, not inalienable rights that we are born with.”