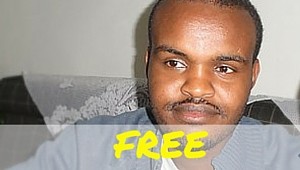 UPDATE October 16, 2015:  After 539 days in prison, Abel Wabela was released from jail.  The Ethiopian Federal High Court the blogger of terrorism charges that were lodged against him in connection with his online activism.

Abel Wabela, one of the co-founders of a bloggers’ organization called Zone 9, was imprisoned on April 25, 2014, along with other Zone 9 bloggers and journalists who aim to spread awareness of human rights violations. Accused of committing an act of violent terrorism, he was arrested under the Anti-Terrorism Proclamation. Although he was beaten and tortured in jail, Wabela refused to sign a prepared confession paper, insisting his innocence. Before his imprisonment, Wabela was an author and translator for Global Voices, an employee of Ethiopian Airlines, and a graduate of Mechanical Engineering. He had been blogging since 2009. On July 8 and 9, 2015, a number of imprisoned Zone 9 bloggers and journalists were released with charges dropped. However, Wabela remains behind the bars to this day.